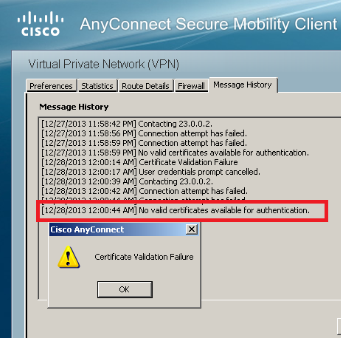 Dear Community, We recently enabled multi-factor authentication for our Remote Access VPN using both certificate and user credentials. Our VPN users use the Anyconnect client version 4.2.01035 for both Mac and PC. We have deployed the cert to all mobile end user devices in our company (Windows mach...

· 3rdly and this is my problem - I then disconnected from the VPN and attempted connecting just by using the installed VPN client. (not by browser) No luck. Every time I try I get "No valid certificates available for authentication" and "certificate validation failure". This makes no sense.

Forget the troubles that passed away, but remember the blessings that come each day.